Treatment of blepharospasm and hemifacial spasm with botulinum A toxin: a Canadian multicentre study

Article abstract –Botulinum A exotoxin was recently approved for use in Canada. We describe the efficacy of botulinum toxin in the management of 235 patients with blepharospasm (mean age 64.3 years) and 130 patients with hemifacial spasm (mean age 60.4 years) treated at three Canadian ophthalmologic old centres between 1984 and 1989. A total of 98% of the patients with blepharospasm and 100% of the patients with hemifacial spasm had significant relief of their symptoms; however, 11% of the former and 2% of the latter did not respond to the usual starting concentrations of the drug and needed stronger dosages for relief. The duration of relief varied widely in both groups. Up to 7% of patients had ineffective treatments but responded to subsequent injections. Analysis of variance and linear trend statistics showed that there were no changes in the mean duration of relief over the first several treatments for individual patients in either group. Side effects were transient and included ptosis, exposure keratitis, epiphora and strabismus.

In 1978 botulinum A exotoxin was introduced as a treatment for the eye disorders in humans.[1] After detailed clinical trials this drug was recently approved for the treatment of blepharospasm and hemifacial spasm [2] as well as adult strabismus by the Food and Drug administration in the United States and Health and Welfare Canada. Research trials are continuing to assess the efficacy of the drug for the treatment of spasmodic torticollis, spasmodic dysphonia, or oral mandibular dystonia, writers cramp and childhood strabismus.

Several studies have confirmed the high rate of relief of symptoms after treatment with botulinum toxin in patients with severe disabling eyelid spasms caused by essential blepharospasm [3-15] or hemifacial spasm. [9-16] In almost all cases, however, because the relief is temporary (typically lasting several weeks), periodic treatments for an indefinite length of time are necessary. [3-16]

To examine the efficacy of the drug, we combined our experiences treating blepharospasm and hemifacial spasm with botulinum A exotoxin at three Canadian ophthalmological centres (London, Ont., Toronto and Montréal). By pooling our data we were able not only to include a larger number of patients than have previous studies but also to analyze these patients' progress over the course of many more serial treatments then have previously been reported.

We report the results of treatments with botulinum A exotoxin given at our three centres between January 1984 and December 1989. We included in our study only patients with a diagnosis of blepharospasm (alone or as part of Meige's syndrome) or hemifacial spasm. [2] Each patient underwent a complete ophthalmological examination before treatment. The treating physician rated the severity of the spasms on a five-point scale, from 0 (no signs) to 4 (very severe spasms). [4,5,7-9,11-15] For all patients whom we treated the rating was 3 or 4.

We used a lyophilized preparation of botulinum A exotoxin supplied by the Smith–Kettlewell Eye Research Institute, San Francisco, in vials containing between 100 and 200 mouse units (MU) of toxin activity. One MU is equivalent to 0.4ng of dried toxin. [1,2]

To treat blepharospasm we injected the preseptal and pretarsal orbicularis muscles and, in most patients, the procerus and corrugator muscles on both sides at four to six sites (Fig.1), according to the protocol of Scott and colleagues. [3] For in the initial treatment, using a 27- or 30-gauge needle, we injected between 2.5 and 5.0 MU of botulinum A exotoxin in 0.1 ml of non-preserved saline at each site. To reduce the risk of ptosis we did not inject the central part of the upper eyelid. For patients with hemifacial spasm we injected the periocular muscles on the affected side at the same sites as for patients with blepharospasm. We also gave two or three injections of 2.5 MU in the angular oris and ala nasi muscles on the affected side at the sites illustrated in Fig.1. In no case did we treat any patient with more than 150 MU (0.06 μg) of toxin for any single treatment. The median lethal dose (LD50) for a 70 KG person is approximately 2.0 μg. [1] 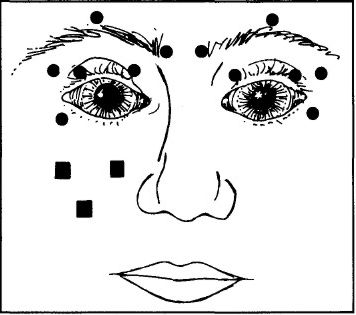 After each treatment we reassessed each patient to determine the degree of relief of spasms and the presence of any side effects. We considered a treatment successful if there was an objective reduction in spasm intensity of at least two points on the rating scale or a significant subjective reduction of the symptoms accompanied by improved daily functioning lasting at least 6 weeks. [7,9-13] We defined the duration of relief as the time between treatment and the recurrence of symptoms disabling enough to promote the patient to request another treatment, [5,7,9,10,12-15] not as the interval between the actual treatments, since there was often a delay of 2 to 4 weeks before repeat treatment could be scheduled. We included in the analysis only treatments for which the duration of relief was known.

We recorded the occurrence and duration of side effects of treatments in the two groups.

We calculated the mean duration of relief and standard deviation for each of the first nine treatments for all patients with blepharospasm and for each of the first seven treatments for all patients with hemifacial spasm. To analyze the effect of treatment number on duration of relief within individual patients, we selected the subgroup of patients from each group for whom we had complete data for these treatments. We performed one-factor repeated-measures analysis of variance on the data for the two subgroups to separate the effects of interpatient variability from those of treatment number on duration of relief. We also did linear trend analysis (ratio of linear contrast to standard error of contrast) to look for any trend of increasing or decreasing mean duration of relief within the subgroups. We considered a p value under 0.05 to be significant.

Table 1 – Characteristics of patients with blepharospasm of hemifacial spasm treated with botulinum toxin. 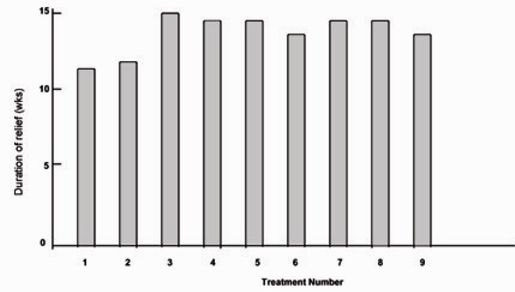 Figure 3:
Mean duration of relief for the 25 patients with blepharospasm for whom data were complete for the first nine treatments.

Of the 235 patients 27 (11%) did not respond to the initial dosage of toxin; 23 of the 27 eventually responded successfully to subsequent treatments at higher concentrations of the drug. Thus, only four patients (2%) did not respond at all to treatment with botulinum toxin. 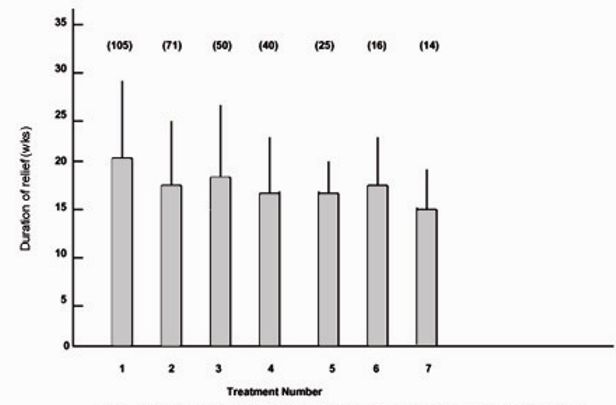 Figure 5:
Mean duration of relief for the 12 patients with hemifacial spasm for whom data were complete for the first seven treatments.

Among treatments 2 through 11 of the total of 230 treatments, five (2%) were ineffective.

Table 2 – Incidence of side effects.

The side effects of treatment with botulinum toxin are summarized in Table 2. The most common side effects, ptosis, has been reported by other investigators. [3-18] In all cases the problems were transient and resolved within 2 to 10 weeks. Patients who experienced dry eye from lagophthalmos after treatment were given artificial tears. None of these patients manifested any corneal complications.

Injection of botulinum toxin is an effective treatment for blepharospasm and hemifacial spasm. It's clinical effect manifests after a latent period of 2 or 3 days and is maximal by 7 to 10 days. However, relief from spasms is temporary in almost all cases, and patients must undergo periodic treatments every 3 to 4 months on average. Double-blind studies have shown that this drug markedly relieves facial spasms when it's effects are compared with those of a placebo. [3-8]

Our combined experience in three centres confirms the efficacy and safety of botulinum toxin in the treatment of blepharospasm hemifacial spasm. There is a wide margin of safety between the therapeutic and toxic dosages in humans. [1] The dosages used in treatment do not simulate a detectable antigenic response to circulating toxin. [19] None of our patients experienced any systemic toxic or allergic reaction to the drug.

Our results indicate that where there is a wide variation in the duration of relief from symptoms among patients with either disorder. The duration of relief in our patients ranged from 6 to 48 or 52 weeks, although we found that the average interval differed between the two groups (14 weeks for blepharospasm and 18 weeks for hemifacial spasm), a trend reported by other authors. [9,10,12,14,15]

We had expected that the duration of response might increase with serial treatments because of denervation atrophy induced by repeated doses of botulinum toxin. However, the analysis of variance and linear trend statistics did not show a significant variation in duration of response among consecutive treatments for individual patients. Therefore, our results do not substantiate the conclusions of other investigators who who have reported trends of increasing or decreasing duration of relief with serial treatments. [5,6,9,10]

From our experience, almost all patients with hemifacial spasm should respond to treatment with botulinum toxin, although a few (about 2%)'s will require higher starting concentrations than usual. We also conclude that up to 98% of patients with blepharospasm should gain relief with the drug, although between 10% and 15% will not respond until higher concentrations are used, as other authors have noted. [7,12,14] It appears that there is a subgroup of patients who have a higher than average threshold for response and thus require greater dosages of botulinum toxin to achieve sufficient muscle relaxation for their symptoms to be eliminated.

We found that for up to 7% of the patients who responded to treatment, the next treatment, at the same dosage, was ineffective, yet further treatment at the same dosage was effective. We excluded these data from our analysis because we felt that they would lead to incorrect results in the calculation of the effects both among serial treatments for individual patients and among patients. These ineffective treatments may have been caused by local diffusion of the drug away from the muscle end-plates, resulting in subtherapeutic amounts of drug being bound to the end-plates. Alternatively, despite good quality control at the time of drug production, occasional vials of the drug may contain smaller amounts of the toxin or less potent toxin than expected. In such cases the patient should be given a repeat treatment at the same dosage with toxin from a different, fresh vial. If this treatment fails to provide relief, the injection should be repeated with a higher dosage. We agree with Scott and colleagues [3] that repeat treatments should be at delayed at least 2 to 3 months to allow the release of bound drug from muscle end-plate receptors.

A small number of patients who appear to have essential blepharospasm are unresponsive to treatment with botulinum toxin despite marked paralysis of the orbicularis oculi after treatment. These patients suffer from apraxia of opening the eyelid or an inability to voluntarily elevate the levator palpebrae superioris. [2,9,20] We did not include such patients in our study.

Because botulinum toxin was until recently under clinical investigation, this treatment was available only in a limited number of centres in Canada, thus requiring some patients to travel long distances to receive treatment. We hope that this article will provide useful information about the treatment and its results and that more physicians will be encouraged to learn about its use so that it will become more widely available in more centres throughout the country.

– We thank Mary Chipman and Yong Hao, of the Department of Preventative Medicine and Biostatistics, University of Toronto, for statistical consultation, and Dr. Charles Pavlin, Dr. Milan Tytla and Medical Publications, The Hospital for Sick Children, Toronto, for advice and assistance in the preparation of this manuscript. – Article originally printed in the CMAJ, VOL. 139, NOVEMBER 1, 1988.

To see a preview before printing, please use your browser's Print Preview button.