Letter From The President

We are still in the process of upgrading our Website with a new look, which we hope you will find easier to read and navigate. It is a very complicated and costly process and we are hoping very shortly to have it available for everyone. At the same time, we will be adding the EyeOpener Symposium 2013 videos to the Website for your viewing. This project would not have been possible without the financial assistance which we have received from both Allergan Canada and Merz Pharma Canada Ltd. sponsorships, and the continued support from our members.

In the coming year, our goal is to add and/or replace Board Members to our organization so that we may continue expanding the locations of Support Groups across Canada in order that patients may get more support in their local communities. Should you be able to set aside a few hours per month of volunteer time for BEBCRF, please contact us for further details.

Dr. Farias has dedicated the last 20 years of his life to research on Dystonia. He obtained his doctorate degree from the Faculty of Medicine at the University of Cadiz, Spain with a dissertation on relaxation techniques applied to treatment of focal dystonia and other work-related conditions in musicians. He obtained a Master's degree in Neuropsychological rehabilitation with a thesis on Anosognosia and Asomatognosia and its role in focal dystonia pathology. He also obtained a Master's degree in Psychosociology with a thesis about Stress Management Strategies as applied to patients with focal dystonia. Joaquin is also a certified shiatsu practitioner specialized in acupressure points to relieve spasticity.

Since 1996 Dr. Farias has helped more than 400 people in 5 continents, affected by different forms of dystonia to improve their coordination. In 2012, the method was first applied to blepharospasm patients with promising results. His method is based on awakening dormant neural pathways in the brain to reduce or suppress spasticity. He has two books on the topic of focal dystonia rehabilitation that were written as self-help books for patients.

Dr Farias himself has experienced musician's dystonia of the hand. Through persistent movement and brain training, over a period of 5 years, he was able to come to a point where he could both "move right" and "feel right" again. He has been able to accommodate this treatment to many types of dystonia, including BEB.

Dr Farias calls his method a complimentary treatment, not alternative. His ideal is not to replace the treating Doctor, but to work alongside him or her. It isn't a requirement to discontinue toxin injections nor medications throughout the treatment; in fact, depending on the patient's situation, it may be preferable to use them to decrease discomfort while them to decrease discomfort while retraining. The best case scenario is when there can be collaboration between Dr. Farias and the injector or prescriber of medications as to the protocol to follow. He has had some good outcomes when this collaboration was possible. Dr Farias has seen a number of neurologists whose family or relatives have had some form of dystonia, worked with them to help them retrain and as a result, had some very positive results.

With Dr. Farias' coaching, many people world-wide have been helped to either eliminate or at the very least, reduce their spasms significantly. A description of his therapy from his web site states, "The intervention included a motion analysis as a baseline. Regarding the deficits and natural movements of the persons' bodies, specific exercises utilizing movements and mental imagery were created for individual patients. Those exercises induced a neuroplastic change that allowed gradual motor control recovery. Following our training protocol, it is possible to obtain greater improvements in coordination in a shorter period of time."

To demonstrate these improvements, we were shown before and after videos of a number of patients, some with blepharospasm and some with numerous other forms of dystonia. Among them were clients who saw amazing progress within days or even hours of starting retraining.

We saw one lady with blepharospasm going through a process of gradually improving her eyelid movement from hard blink (spasm), to half blink, to hyper blink (rapid blinking) over her first days of retraining. These early progressions are the result of changes in the synapse of the neurons, and known as "synaptic plasticity". It is the first step in the process, but without multiple repetitions over time in the proper brain environment, will not be permanent. More long-lasting "systemic plasticity" occurs when the changes become consolidated in the brain over months and years.

Another series of videos showed a woman with blepharospasm relearning to drive. Dr. Farias maintains that the BEB client should be very cautious in this activity, and should review how the spasms develop while driving, so as not to endanger anyone.

Rhythm and music can often be helpful components of the therapy. One video showed a pupil who started with severe cervical dystonia, so that he could not look or stand straight, but with Dr. Farias' coaching and practice, within the context of dance and music, he was moving much more freely after a few weeks. Dr. Farias' initial training sessions usually span 4 days. They involve his doing a great deal of listening and observing on the first day, followed by movement training and feedback as new ways of movement are practiced. Students often see significant progress that isdue to synaptic plasticity by the third day, and then frequently go backward on day four. He likes to be there to help them correct movements, and deal with their psychological response to this regression, so he can underline to them how normal this is, and give them strategies for coping with it. The long-term process is not easy or a straight-line undertaking. Dr. Farias sees it rather as a progression outwards through a series of circles of retraining. 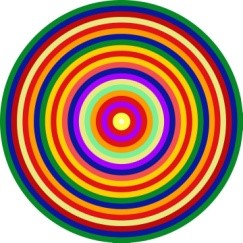 The student starts in the middle, and in the early days of retraining begins to go outward one or two rings, but then in a few days or weeks falls back into the middle. The student then may progress a few more rings and stay there a little longer, perhaps a month or two. She moves back inwards again, but not all the way back to the middle this time, then progresses to rings farther out. After maybe a year or more, she stays in the medium or outer rings much longer, but still might find herself, perhaps once a year or so, dipping back into the smaller rings. Some people will even go five years in the outer rings with few symptoms, but then, at a stressful time, find themselves much farther in again.

This fluctuation is normal, and a necessary part of the process, so should be embraced. The course of retraining and how long it will take vary a great deal from person to person, and even Dr. Farias himself cannot predict how much someone will improve or what the process will look like. It will be challenging, though. To quote from his book on retraining, "Dystonia rehabilitation is a long and difficult process. It requires from a patient a great psychological resiliency to discouragement." (Intertwined. How to induce neuroplasticity; Farias, Joaquin; Galene Editions, 2012; p. 116)

Dr. Farias introduced the concept of video movement magnification to allow us to see imperceptible movements of faces. It seems that, to a tiny degree, everyone has the movements of Cranial Dystonia(Meige Syndrome), but that for most people, the brain's ability to inhibit movement makes the face look still to the naked eye. Retraining means relearning this inhibition. He showed us videos of "still" faces becoming quite active under movement magnification.

It is well-known that certain "sensory tricks" or activities can often lessen symptoms, at least for a time. For instance, putting pressure on a specific area of the face, or doing an activity such as washing dishes, might stop the spasms. Dr. Farias believes that these tricks and activities can lead us to answers as to how to retrain the brain, and that practicing decreasing spasms this way can be used as a retraining tool. These techniques can be a positive way to give us more time free from spasms.

It is also important to find ways to keep our minds active and focused during retraining, because we are more likely to spasm when life becomes boring or predictable. He noted that many of his women clients find their spasms is worse when listening to their husbands. This may be because, over time, they have become used to their spouse's habits, jokes, etc., and nothing seems worth focusing on. By making changes to the routine, it may help lessen spasms and it is also good to keep life interesting.

Dr Farias was asked about his client failure rate, to which he replied that he would consider only 5-10% as having failed; however, how do you classify someone as a failure if eventually the spasms may change after a longer period of time, perhaps taking up to 10 years to improve (which he has seen)? His earliest blepharospasm clients had been training for less than three years at the time of the presentation, so long-term outcomes are still unknown.

Another question was related to how to deal with the fact that though ideally, retraining exercises should be limited to only about ten minutes a day, those with blepharospasm cannot really take a break, because we need to use our eyes during all our waking hours. Dr. Farias explained that often, real-life retraining is less than ideal, but that we work with the challenges and make progress anyway. For instance, it would be ideal for a client to be able to take two years off working in order to have adequate rest, and focus totally on retraining, but if that is not possible for financial reasons, the client may need to continue working, and will perhaps require Botox to make that possible. Another example is that it would be ideal for the brain to retrain with little or no medication, but in a situation where the client is depressed, taking mood-regulating medication may make retraining possible.

Dr Farias was also asked what was in his “bag of tricks” to help the client. He replied that everyone's training is individualized. As a therapist, he learns much by observing and through trial and error. There is no set pattern to treat a particular type of dystonia to ensure that all clients achieve the same results. He stated that he would be happy to train other therapists to practice his methods, but that an interested individual would need to commit more than a thousand hours to this professional training.

With suggested tips and methods from Dr Farias, the clients themselves must also work with what they have, and come up with ways to help themselves. Many clients develop their own successful exercises, after understanding the concepts they learn from him. It is only with hard work and relentless practice that they will see results.


BEBCRF Inc. is not associated with Joaquin Farias, PhD. It is up to the individual patient should they wish to follow up with this process.