BEB: An Unwanted Guest Living With Me

Thank you for inviting me to speak at the first meeting of the Calgary Support Group. I have been a BEB patient for 14 years. I would like to share some of my experience with you today

Today I shall briefly review that period (1996-2004) and update my experience since that report. Along the way, I shall describe the development of an Eye-Condition Rating Kit, which resulted from my attempt to objectively monitor my response to treatment and provide feedback to my doctors.

Finally, I shall provide some tips on dry-eye treatment based on my own experience. The opinions expressed are mine alone and do not represent an official view of the BEBCRF. Likewise, medications mentioned are not necessarily endorsed by the BEBCRF.

I first noticed that my eyes were dry and that I was blinking a lot in December 1996. In January 1997 when we were visiting friends, my wife thought I was falling asleep during the conversation. I was not sleepy, but just could not keep my eyes open. In February my family doctor referred me to Dr McGowan, an ophthalmologist. I was diagnosed with secondary blepharospasm due to dry eyes.

From February to October 1997, we tried various eye drops, favouring those that were preservative-free. Dr McGowan also installed collagen punctual plugs. These had no impact on my eyelid closure problem, though they did help the dry-eye condition before they dissolved after a few days.

By August 1997, Dr McGowan suspected that I had Benign Essential Blepharospasm. I looked it up on the Internet, found the BEBRF website in Beaumont, Texas and found descriptions of BEB symptoms that seemed to fit mine.

Shortly afterwards, a colleague who had been working for the summer with Bob Campbell in Sault-Ste-Marie, Ontario, told me that Bob had symptoms similar to my own. Coincidentally, Bob was the webmaster of the BEBRF site and had done considerable personal research on BEB. He recommended that I ask to be referred to Dr Kraft for botulinum toxin (Botox®) treatment.

Dr Kraft injected me several times between November 1997 and August 2000, varying the injection sites and dosage according to the response that I was able to provide.

In September 1997, two months before my first treatment, I had begun keeping a daily record of my eye condition. I shall now describe how this led to the Eye-Condition Rating Kit.

First Step Towards a Rating Kit 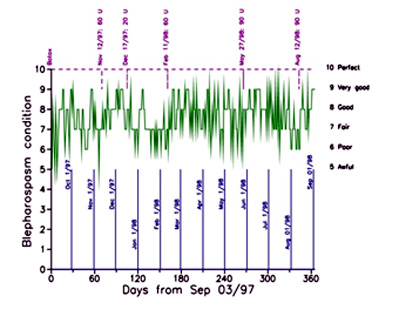 The information at the right side indicates the descriptive label that I assigned to my condition (Awful to Perfect). These descriptions are associated with a score (5 to 10, respectively), indicated on the left side. I call this a patient-oriented rating scheme; the higher the score, the better the day for the patient. This contrasts with the doctor-oriented approach in which a score of zero is usually the best (e.g., Jankovic et al., 1982; Iwashigi et al., 1995).

Notice that the day-to-day scores represented by the green line are highly variable, making it difficult to see patterns. Nevertheless, there is some improvement evident after each injection. This benefit continued through to about May 2000, after which I did not respond significantly. Still, I had about 30 months of positive response.

In May 2000, I borrowed a video from the BEBRF Video Lending Library on the Limited Myectomy procedure pioneered by Dr James Patrinely. In June, I contacted Dr Patrinely by e-mail. He recommended that I get a referral to Dr David Jordan at the Eye Institute in Ottawa. Dr Kraft referred me in July. I saw Dr Jordan in August. He diagnosed apraxia of lid opening (AOL) in addition to blepharospasm and dry-eye.

Dr Jordan's inclination was to treat the blepharospasm and dry-eye conditions first. He performed the Limited Myectomy (LM), a levator muscle enhancement and upper punctual occlusion in September 2000. This was done with a local anaesthetic and was virtually painless. I recovered quickly and with the help of ice packs the following day, I had very little pain or swelling. The improvement was noticeable immediately, as seen in Figure 2. 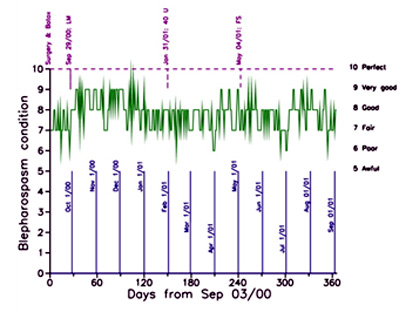 Unfortunately, the benefit lasted only about three months. By January 2001, I was back to the Fair to Good range (scores of 7 to 8). I went back to Dr Kraft for another Botox® injection, without noticeable improvement. 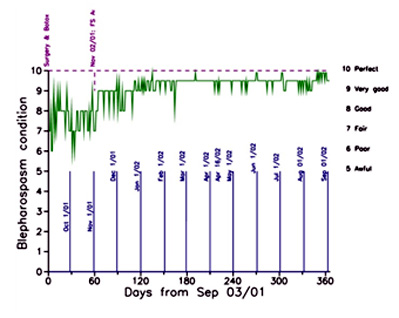 In May 2001 Dr Jordan performed a Frontalis Sling procedure, which was intended to overcome the apraxia. There was some improvement for a few weeks but then I was back to scores of 7 and 8. In November 2001, Dr Jordan made a minor adjustment to the Frontalis Sling and from then on my eye condition was mostly Very Good (scores of about 9) or higher, as shown in Figure 3. I discontinued recording and charting my condition after five full years in September 2002.

Figure 4 shows more clearly than the daily values how I responded to the various treatments. It was only after the frontalis sling was adjusted (red triangles in Figure 4) that I received prolonged benefit.

Figure 4. Plotting of weekly average eye condition as a function of number of weeks since treatment. 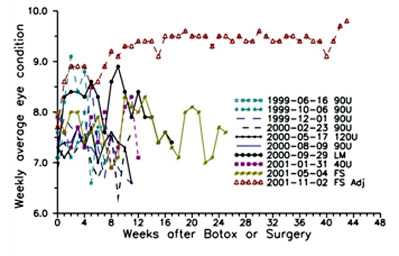 In the legend, U means units of Botox®, LM is Limited Myectomy, FS is Frontalis Sling, Adj is Adjustment.

In 2002, I was diagnosed with Parkinson’s Disease (PD) by Dr Consky, a neurologist who specializes in movement disorders, including BEB. He began treating me with medications, which, together with physical exercise, have combined to keep my condition relatively stable. I try not to think of the future; rather I attempt to concentrate on what I can do in the present. I mention PD only because, like BEB, it is a neurological condition.

I have heard that PD is somewhat correlated with apraxia, but I think the evidence is mostly anecdotal at the moment.

Unfortunately, in February 2007, I developed a severe infection in my left eye, which was not treated soon enough. The cornea was perforated. Although Dr Slomovic saved my eye, he could not restore my vision in that eye due to scar tissue on the cornea. Dr Slomovic was not happy with my frontalis sling which prevented my eyes from closing completely while I was sleeping (a condition known as lagophthalmus). I went back to Dr. Jordan in July 2007. He untied the frontalis sling in my left eye. Fortunately, this did not seem to have a negative impact on my eyelid condition to date. I am taking better care of my eyes, especially at night. I shall discuss some dry-eye treatment strategies later.

The rating kit may be downloaded from the Medical Information section of our website. In the kit, Table 1 contains the Jankovic rating scheme mentioned in Section 3, above. Table 2, shown here as Figure 5, displays an example of how the daily values may be recorded, using spreadsheet software (e.g. Excel®). 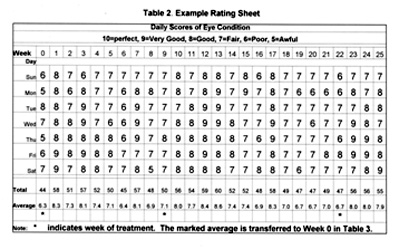 The average score for each week is computed in Table 2 and transferred to Table 3 (Figures 5 and 6, respectively, here). For the convenience of patients and their caregivers, blank forms of Tables 2 and 3 are included in the Rating Kit. 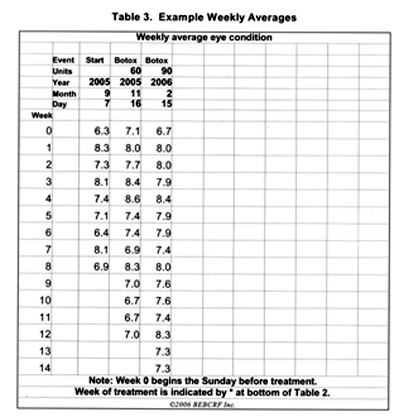 The averages are plotted in Figure 7. 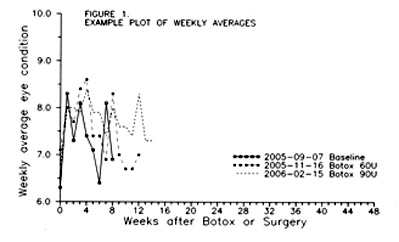 I try to use mainly preservative-free eye lubricants. When I do use eye drops containing a preservative, I avoid benzalkonium chloride, which I find irritating. During nighttime, I use Lacrilube™ and TearGel™. I find that the former is sometimes difficult to remove at awakening, so I use Blephagel™ to cleanse my eyelids. (Many patients use LidCare™ for cleansing. LidCare comes in two formats – gel in bottle with gauze pads or pre-soaked gauze pads, which are handy when travelling.) A tiny amount of Blephagel™ on a gauze pad rubbed with a gentle circular motion helps significantly. I wear a sleep mask at night to help further keep the eyes lubricated. A humidifier is also useful, especially in winter when interior spaces tend to become somewhat drier.

During daytime, I find that TheraTears work well as eye lubricants. Some patients find that baby shampoo is less irritating than regular adult shampoos and conditioners. Wrap-around sunglasses, which fit over my regular glasses, are helpful, as my eyes are sensitive to light and wind. A sunhat with a brim helps shield my eyes and provides a sun block for my skin. Some patients have a tint called FL-41™ applied to their glasses.

Thank you for your attention today. Thanks to Anil Relan for organizing this meeting in Calgary. I would also like to send a big thank-you to my Toronto physicians, Drs Kurtz, McGowan, Kraft, Consky and Slomovic and, in Ottawa, Dr Jordan for their care.

I am also extremely grateful to my wife Kathryn, my son Andrew and my brother Glenn for their love and support.

BOTOX® is a registered trademark of Allergan Corporation

Q. – Did you tie your activities to your eyelid condition?

John. I did not explicitly, though I am aware that activities that lead to dry eye make things worse.

Q. – What size needles should doctors be using for injecting and how should injections be given to avoid droopy eyelid (ptosis)?

John. These are questions for the professionals. I know that Dr Kraft uses 30-gauge needles. He has said many times that injections should be away from the levator muscle in the centre above the upper eyelid.